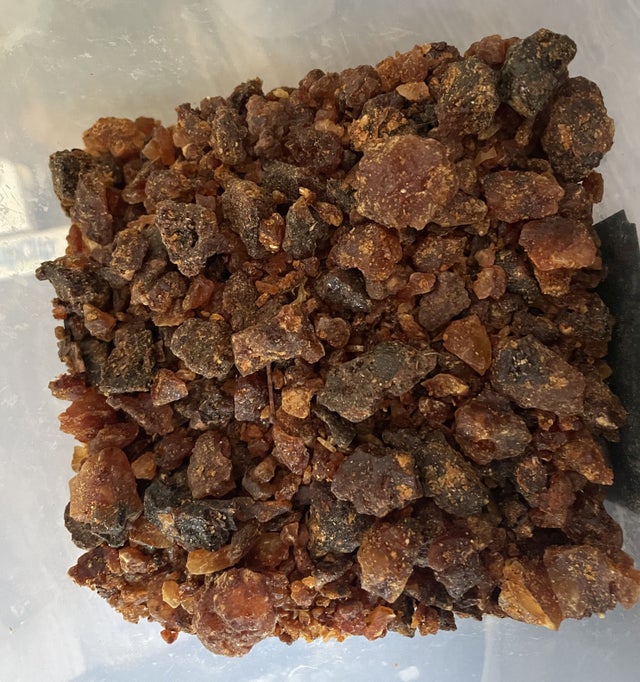 Myrrh is an aromatic resin that comes from a number of small thorny tree species in the genus Commiphora. Myrrh is similar to the Frankincense species when the tree wound penetrates the bark the tree bleeds resin. These resins are wild-harvested meaning when an animal brushes up the tree the resins fall off and then it is collected.

Myrrh has a very bitter smell and taste but its' uses make up for it. It has been used for centuries for incense as well as natural medicine, and for may heal wounds. It is extremely grounding.

Myrrh moves the blood and Myrrh is not an obvious aphrodisiac. It is far better known for its medicinal applications but in ancient times it has been used to increase desire especially in men.. MYRRH (Heb. מוֹר, mor), was one of the most important perfumes of ancient times. It was dissolved in olive oil and put on the temples kings garment to enhance sexual desire. When each girl’s turn came to go to King Ahasuerus at the end of the twelve months’ treatment prescribed for women (for that was the period spent on beautifying them: six months with oil of myrrh and six months with perfumes and women’s cosmetics, (Esth 2:12)

It is upon "the mountain of myrrh" that the beloved dreams he will meet his heart's desire (4:6)

It can be made into a tincture and used for any mouth issues. Pop a piece in your mouth when you have a toothache until you can get to the dentist.

This Myrrh is from Ethiopia,

These pieces are smaller. I broke up the myrrh because most of my customers are using Myrrh in incense, in tinctures or in herbal infusions and it is way easier to do it this way.

So I made it easier for you to use by breaking up the bigger pieces.

Myrrh moves the blood so it is not recommended for pregnant women. One should also take care if on blood thinners or aspirin therapy.

a good resource on myrrh

My goal is to sell quality resins at an affordable price. Some of you know me as the Queen of Resins because of the knowledge I have from constantly studying these resins and the friendships I have created with those who sell and harvest these beautiful trees.

These resins are harvested by Fair Trade Standards only.

Add to Cart
Disclaimer: All information is for educational purposes only. Resins are not a substitute for professional medical care and it is advised that you always consult your health practitioner.
Resins may irritate the skin so please handle with care.