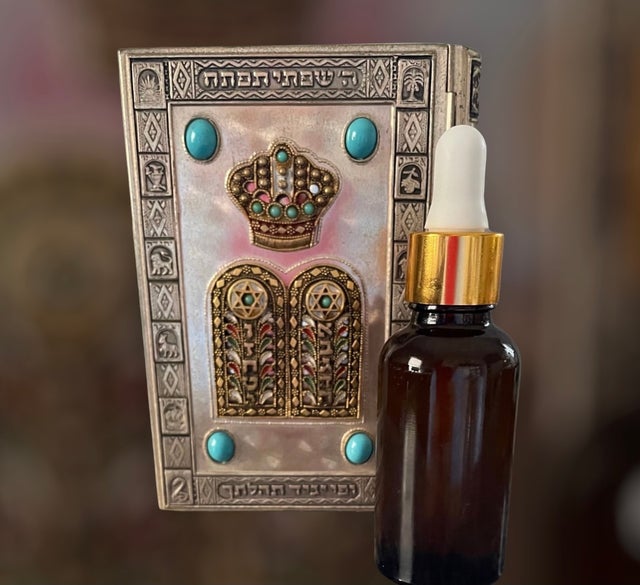 I created this oil from researching and reading the different oils that are in the Old Testament. I have been researching these oils for over a year for the Ancient Oils of the Bile Course I am giving. So why not create a few of the 12 anointing oils that were made during Solomon's time and used in the first temple.

I have been aging this combination of herbs for one entire year in the ancient olive oil and that was used during this ancient time.

These 4 are in the original 12 that were used., and the 2 carrier oils.

Since I really do not have the rest of the herbs used I wanted to round this out a bit- since this Anointing Oil is strictly for meditation and added: Boswellia papyrifera, , Styrax Benzoin Sumatra, and Boswellia neglecta resins.

This anointing oil is similar but not the same as in the Bible.

It is written: " Do not make any incense with this formula for yourselves; consider it holy to the Lord. Whoever makes incense like it to enjoy its fragrance must be cut off from their people.”

We are not permitted to make the entire formula, that is forbidden, but you can use a few of the herbs like I did and I added a few more to round it out that are not in the original 12.

The smell is very early and spicy with a wee bit of minty notes. Anything I make I try myself and put a drop. on the inside of my wrists, sat in front of the place where i normally mediate and it took me to places that were absolutely wonderful.

I am selling it in a 30ml bottle that reflects its beauty. I am hoping you will like it as much as I do. I just started a new batch but it will not be ready for at least another year so when this one is gone-thats it till it is ready again.

Add to Cart
Disclaimer: All information is for educational purposes only. Resin, herbs and plants are not a substitute for professional medical care and it is advised that you always consult your health practitioner.
Resins may irritate the skin so please handle with care.